Sacheta and I were in Sri Lanka on vacation. We started with Kandy in the center, went south to Galle and then came to Bentota.
I had the vOICe with me and did not experience any problems in its usage. The sky was clear and I experienced many rich soundscapes. This time, I had a way to label images on the fly. I have recently switch to a Nokia 9 pure view phone and thanks to Rich D of the tasker mailing list, I had a solution where, once a new photo was taken by the camera, I was asked for a file name which I entered. The image was renamed to that name so I had labeled photographs and could record what I saw without resorting to post trip sighted descriptions. The downside to this was that I took fewer photographs because it was taking me time to label them on the fly. To mitigate this, I took some videos and described what I was seeing. If you are using the vOICe, then use the screen and or window sonification feature to view the images in the video. I am still looking for a solution to record the soundscapes from my glasses so that I can bring you what I saw that made me take the video. When I took the videos, I was scanning the scene in front of me and then raising the phone to the right place to capture said scene.

Kandy is in the central highlands of Sri Lanka. The breeze was super and our hotel was good both in terms of the views of the hills, the staff as well as the quality of the food. We were unable to visit the temple of the tooth due to it being full of people. It was impossible to get parking space there and. We did however visit another temple from where we had a terrific view of the sunset and a superb experience of the breeze. This was the first location where I took some videos. We were able to climb a tall statue of the Buddha into his neck and look about.
A video from the top of the statue. I had to hold on to the phone or risk it being blown away.


See the sunset from a little lower down.

Finally,, some intriguing decorated trees as we walked down the staircase.

See the below image for the hut that was present in our hotel.

If there is a must see place in Sri Lanka, it is Galle. The food is super, the beaches are clean and our hotel Amari is in a class of its own. Do not go by the star rating. The hotel will can give any 5 star a run for its money.


We visited the Galle fort. It is not much to speak off in terms of height or preserved weapons etc but the breeze is excellent and you get good views of the surrounding city from it. The stairs are not too bad. We did not go to the very top but were high enough to see whatever there was to see.

Another plus point of Social is the staff. They are very helpful. A case in point, we are extremely uncomfortable around dogs and so far, I have not practiced detecting them with the vOICe. The staff ensured we were not bothered.
We also visited the Galle lighthouse. I believe it is no longer operational but it is not possible to go up or touch the lighthouse. The vOICe came to my rescue once more.


Bentota and the Madu river safari

Our last stop was Bentota. The highlight of this stop was the Madu river safari. The Madu river forest is a mangrove forest with a significant degree of bio diversity. We were taken in a fiber glass boat with an outboard engine. I expected to see different types of roots in terms of shapes but after a bit, the entire scenery was more or less similar.

We landed on 2 islands. Cinnamon island is the more interesting of the two due to more nature being preserved. The people on the island demonstrated how a Cinnamon tree is peeled. I tried watching the demonstration but was hard put to follow the scraping movements. The way that the branch is peeled is that it is held vertically and then it is sliced along its middle. The first layer of Cinnamon is then scooped out and then the second layer is cut out. As far as I could tell, a single knife was the only tool being used in the entire process.
I enjoyed the smell too which is what hit me besides the vegetation as soon as we landed on the island.


The next island was the one that had the Buddha temple on it. See the Bodhi tree. It was crowded and I did not take too many pictures. The vOICe however kept running so I was able to see the statue of the Buddha, the temple and the rest of the island. I expected the monks to object to the hardware but they did not.

We did pass another island with a temple on it. The most fascinating part was how much of the structure I could see from the boat and how clear it was.

In addition, I got permission to sail the boat. The controls were simple namely a tiller equipped with a hand throttle like that on a motorbike. The problem was that the boat was controlled from the stern so it was difficult to gauge how far things were from it. Moreover, I sailed in open water therefore there were no obstructions which I could use as any kind of reference. I saw through the glasses a lot of open water and sky. I had the vOICe at double speed so that I could keep up with changes in the scenery as the boat moved forward. It will take a significant amount of practice though to navigate and I would like to start with a boat where I am at the bow or at least mount the camera at the bow. 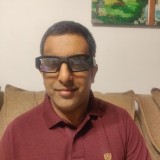